I had a different script in my mind for this post; I had captured this placed it 6 7 months back at hot mid-noon of June; But when I start digging history to know about this tomb I was really surprised that there isn’t any concrete info available for the personality rests there; According to those who live nearby, this is a tomb of princes Zeb-un-Nissa, daughter of Mughal emperor “Aurangzeb” (known as Alamgeer); Is this myth or true history that was doubtful; I searched over the internet, read Mughal history, use google map to see if someone marked that tomb related to some personality but all in vain; Few lines replicated by many (from local writers) tell us that this is the tomb of princes Zaib-un-Nisa else no historical evidence one can find.

My saunterer soul led me to the Department of Information Culture and Tourism & Resort Development Department of Govt. of Punjab to see their records; I went to history department in University of Punjab; Everywhere it is marked as the mausoleum of princes Zaib-un-Nisa;

Some other sources like Wikipedia and Annemarie Schimmel (in his book The Empire of the Great Mughals: History, Art and Culture); we found that the tomb of princes Zaib-un-Nisa, daughter of Alamgeer was built in Dehli; Tha place was known as the garden of “Thirty thousand trees”;

Zeb-un-Nissa died in 1701 in Shahjahanabad (Old Delhi), while Aurangzeb was on a trip to Deccan. Her tomb was in the garden of “Thirty thousand trees”, outside of the Kabuli Gate. But when the railway line was laid out at Delhi, her tomb was shifted to Akbar‘s mausoleum at Sikandara, Agra.
– Wikipedia

You can read about her on Wikipedia (http://en.wikipedia.org/wiki/Zeb-un-Nisa); She was a poet, famous for her taste for art & craft and her love for nature & parks. Chonburi monument, the centre of activity & one of the busiest squares in Lahore was supposed to be a gateway for magnificent ladies park founded by the Mughal princess outside the walled city at that time; 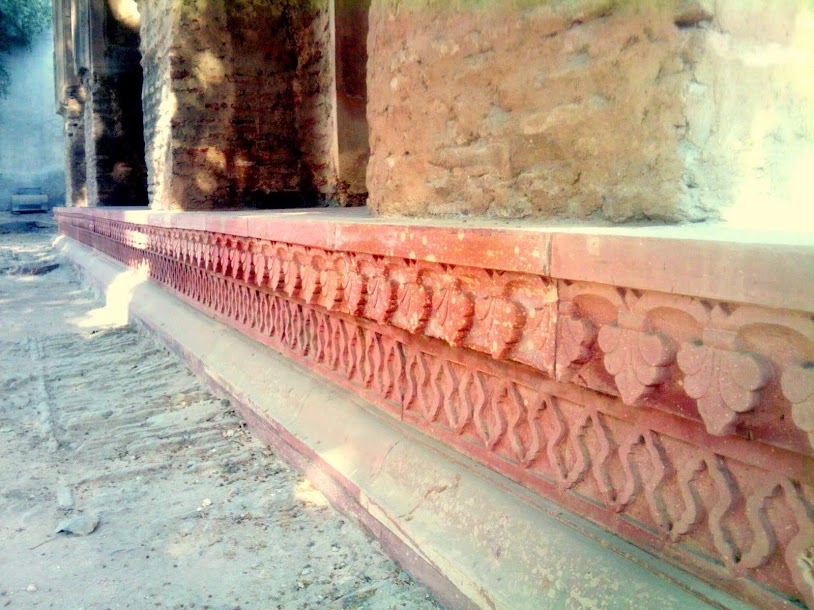 Besides the fact whos inside, the tomb is really in a miserable condition; The black walls, broken bricks, wall chalking and illegal construction in the tomb’s yard has ruined its beauty; Painted & crafted wall interior is either damaged or lost in defence with harsh weather seasons; At its peak, it must be the true representative of Mughal’s unique architectural style; Still, we can find some of the great work on faded walls and arches; How Much Time We Have?